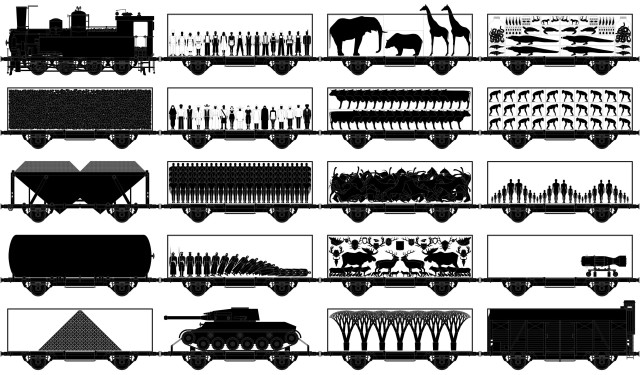 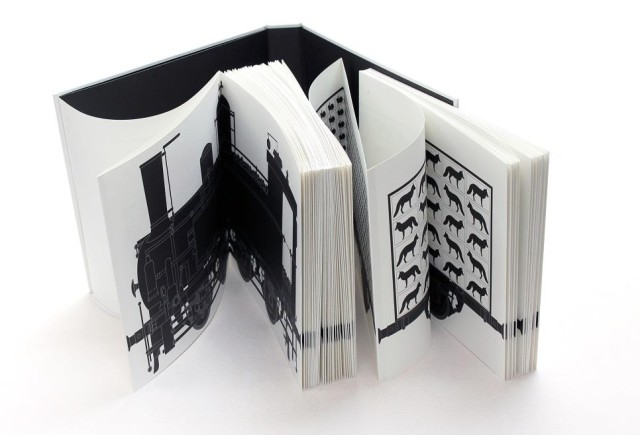 The Locomotive, by Julian Tuwim, is one the most famous Polish poems for children. Designer Małgorzata Gurowska and journalist Joanna Ruszczyk present its graphic and literary reinterpretation for adults. Tuwim’s poem stimulates the imagination with a description of contents in wagons of a train sitting at a station. Although the poet is remembered today primarily as the author of poetry for children, he is also renowned as a satirist who critically described the political-social reality of his time. Gurowska and Ruszczyk, in The Locomotive/IDEOLO, make reference to Tuwim’s social awareness and frequently uncompromising stance, using the text of his poem as a framework for presenting their own position concerning the situation in present-day. In their version, the railway wagons are full of Jews, aggressive football fans, soldiers, gays and lesbians, animals, as well as inanimate objects. It is all accompanied by political commentary, summarizing inequality and social injustice. In this way, the authors challenge not only Polish reality with difficult questions about national identity, racism, anti-Semitism, and attitudes towards ecology and animals.

A big locomotive has pulled into town,
Heavy, humungus, with sweat rolling down,
A plump jumbo olive.
Huffing and puffing and panting and smelly,
Fire belches forth from her fat cast iron belly.

Numerous wagons she tugs down the track:
Iron and steel monsters hitched up to her back,
All filled with people and other things too:
The first carries cattle, then horses not few;
The third car with corpulent people is filled,
Eating fat frankfurters all freshly grilled.
The fourth car is packed to the hilt with bananas,
The fifth has a cargo of six grand pi-an-as.
The sixth wagon carries a cannon of steel,
With heavy iron girders beneath every wheel.
The seventh has tables, oak cupboards with plates,
While an elephant, bear, two giraffes fill the eighth.
The ninth contains nothing but well-fattened swine,
In the tenth: bags and boxes, now isn’t that fine?

There must be at least forty cars in a row,
And what they all carry — I simply don’t know:

But if one thousand athletes, with muscles of steel,
Each ate one thousand cutlets in one giant meal,
And each one exerted as much as he could,
They’d never quite manage to lift such a load.
First a toot!
Then a hoot!
Steam is churning,
Wheels are turning!

More slowly – than turtles – with freight – on their – backs,
The drowsy – steam engine – sets off – down the tracks.
She chugs and she tugs at her wagons with strain,
As wheel after wheel slowly turns on the train.
She doubles her effort and quickens her pace,
And rambles and scrambles to keep up the race.
Oh whither, oh whither? go forward at will,
And chug along over the bridge, up the hill,
Through mountains and tunnels and meadows and woods,
Now hurry, now hurry, deliver your goods.
Keep up your tempo, now push along, push along,
Chug along, tug along, tug along, chug along
Lightly and sprightly she carries her freight
Like a ping-pong ball bouncing without any weight,
Not heavy equipment exhausted to death,
But a little tin toy, just a light puff of breath.
Oh whither, oh whither, you’ll tell me, I trust,
What is it, what is it that gives you your thrust?
What gives you momentum to roll down the track?
It’s hot steam that gives me my clickety-clack.
Hot steam from the boiler through tubes to the pistons,
The pistons then push at the wheels from short distance,
They drive and they push, and the train starts a-swooshin’
‘Cuz steam on the pistons keeps pushin’ and pushin’;
The wheels start a rattlin’, clatterin’, chatterin’
Chug along, tug along, chug along, tug along! . . . . . 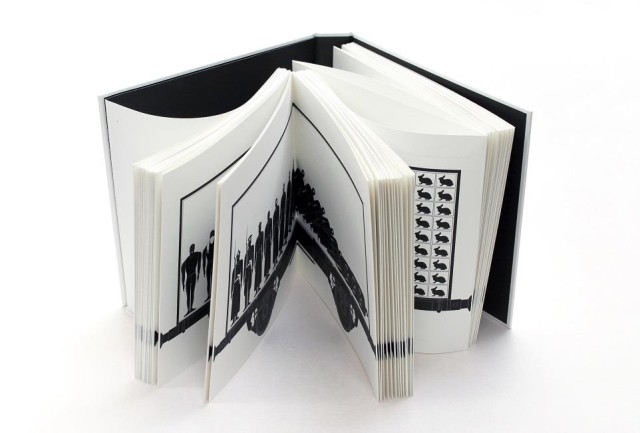